Quite often, when such a diagnosis is made, it is suggested that an operation be performed to remove the entire gland. At the same time, they do not tell that there is another method of treatment, or they claim that it is ineffective and almost always leads to relapses.

Let's figure it out.

What is Bartholin's gland?

Bartholin's gland is a large steam gland of the vestibule of the vagina, located in the thickness of the labia majora at their base.

The excretory duct of the Bartholin gland opens on the inner surface of the labia minora.

Bartholin's gland secretes a viscous grayish protein-rich fluid that maintains normal moisture in the mucous membrane of the entrance to the vagina, which contributes to the favorable course of sexual intercourse. 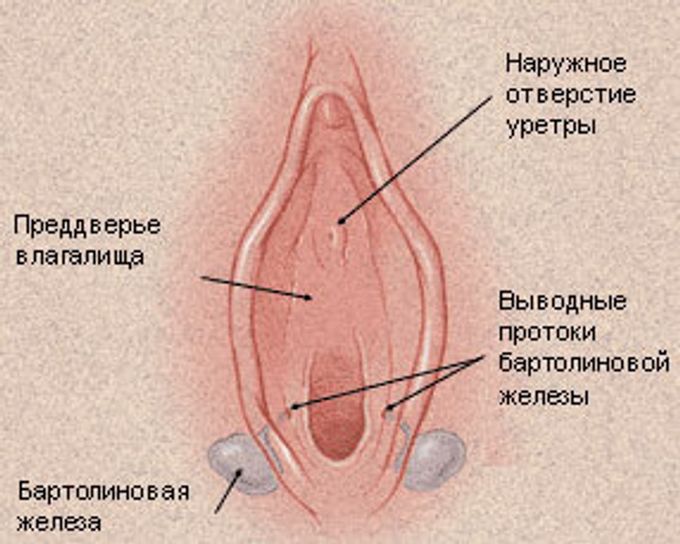 That is, this gland is necessary and it is desirable to preserve it.

What can happen to her?

If the excretory duct of the gland is clogged, then the secretions of this gland accumulate inside and a cyst forms. It looks like a rounded swelling of the lips of various sizes from 1 to 3-4 cm. Usually, the presence of a cyst does not manifest itself in any way, and only with large sizes can discomfort be observed during movement and sexual activity.

However, the gland can become infected and then its purulent inflammation begins with the formation of an abscess. This condition is also called bartholinitis. In this case, the lip increases in size, but unlike a cyst, it becomes sharply painful, the temperature may rise, and there will be pronounced discomfort when walking. An abscess or bartholinitis develops quickly, in 2-4 days, while the size of the abscess can reach 8 cm. An abscess of the Bartholin gland can open on its own. Typically, a bartholin gland abscess (bartholinitis) is caused by E. coli, but can also be caused by gonococcal or chlamydial infections.

How to treat cysts and bartholinitis?

Small, usually asymptomatic cysts can be left untreated except for cosmetic reasons. Treatment is for large cysts that interfere with daily activities and sexual activity, and to improve the appearance of the external genitalia.

The main task of the treatment is to restore the gland, or rather, re-form the channel through which the mucus produced by the gland would come out.

Quite often, with cysts and abscesses of the Bartholin gland (bartholinitis), a simple autopsy is performed. That is, an incision is made, the contents of the cyst are poured out, the cavity is washed out and that's it. This approach almost always leads to the fact that after a while the cyst or abscess (bartholinitis) will reappear.

This is due to the fact that the tissues after dissection very quickly stick together and close the outflow from the gland. Therefore, the task of treatment is to create such conditions so that after the incision the hole does not close, and a new channel is formed. In order for a new channel to form, it takes time for the edges of the channel to be covered with epithelium. The epithelium does not stick together (for example, the vagina is covered with epithelium and therefore does not stick together and does not overgrow). In other words, it is necessary to create conditions for the channel to be open.

In America, the treatment of a cyst and abscess of the Bartholin gland (bartholinitis) has been started for more than 40 years with the installation of the so-called Word catheter. Other methods of treatment are used when this is not effective and repeated relapses of the disease.

The meaning of the method is very simple. A small incision (3-5 mm) is made in a cyst or abscess under local anesthesia, the contents are evacuated and the cavity is washed. After that, a so-called Word catheter is inserted into the cyst.

This is what the Word catheter looks like before installation

This is a small thin silicone tube, at the end of which a ball swells, which prevents this tube from falling out of the cyst.

Word-catheter: a fixing ball is inflated at the end.

Scheme of installing a Word catheter

Such a catheter is left for 6 weeks and then removed. During this time, a new channel of the gland is completely formed, which will no longer stick together, since its walls are completely epithelialized and therefore do not stick to each other. The installation of the catheter takes 5-7 minutes and is almost painless.

Relapse after such an operation occurs in 10% of cases and is usually associated with re-infection of the patient or premature catheter loss (usually it is well fixed). The placement of the catheter can always be repeated.

If you know English, look at the links on this topic:
http://emedicine.medscape.com/article/80260-treatment
http://emprocedures.com/obgyn/bartholin/introduction.htm

I install only original American Word catheters. To install such a catheter, you must have a “cold”, that is, without a sign of acute inflammation, a cyst larger than 3 cm. It is impossible to install a catheter in smaller cysts, as well as in the presence of active inflammation. The total cost of installing a catheter, including its cost, is 18,000 rubles.

If you do not live in Moscow, in order for me to say for sure whether it is possible to use this method of treatment in your particular case, you need to send a photo of the cyst from two angles to my e-mail dimdoc77@gmail.com (general view of the perineum, and photo when abducting the labia majora, so that the dome of the cyst is completely visible). Also in the letter indicate the history of your disease, age, city of your residence.

I stopped using this method of treatment, because in the long term this method was not as effective as I expected.

Marsupilization of a Bartholin gland cyst

The operation is performed on an outpatient basis under local anesthesia. With proper anesthesia, it does not hurt at all. The operation usually takes 20-30 minutes. After anesthetizing the mucous membrane of the labia at the site of the greatest bulging (this is practically at the entrance to the vagina), an oval incision is made, that is, an oval mucosal flap 1.5 cm in size is cut out. Then, symmetrically to the first incision, the cyst wall is cut out with an oval. All contents are removed from the cyst cavity, the cavity is washed. Next, the cyst wall is sutured to the lip mucosa with separate sutures. The result is a hole with cyst walls sutured to its edges. This completes the operation. The patient can go home. Subsequently, several wound treatments are performed. Ultimately, after a few weeks (everything is different), the wound heals completely, leaving no trace, while the excretory duct of the gland is formed and the gland works as before. This operation allows you to save the gland and ensure its normal functioning.

Complete removal of the Bartholin gland cyst is indicated only with repeated relapses after marsupilization.

In Russia, most often they immediately offer to remove the cyst completely - this operation has only one advantage - there are no relapses, and there are enough disadvantages:

Treatment of a bartholin gland abscess

Only the onset of inflammation of the Bartholin gland can be cured by taking antibacterial drugs, but the effect is not unambiguous - the inflammatory process can continue, despite the treatment. Then either an independent opening occurs or it is necessary to open such an abscess surgically.

Now, it's up to you which treatment method to choose...

What is the main cause of Bartholin cyst?

Experts believe that the cause of a Bartholin's cyst is a backup of fluid . Fluid may accumulate when the opening of the gland (duct) becomes obstructed, perhaps caused by infection or injury. A Bartholin's cyst can become infected, forming an abscess.

Do Bartholin cysts go away on their own?

A Bartholin cyst develops when a blockage occurs in a Bartholin gland in the vagina. This blockage causes a lump that can cause irritation and pain during walking, sitting or sex. Bartholin cysts can resolve on their own over time . If it becomes infected, it may need treated by a healthcare provider.

How long do Bartholin cysts last?

Don't have sex while a Bartholin cyst is healing. If the cyst is infected, it may break open and start to heal on its own after 3 to 4 days . But if the cyst is painful, your doctor may drain it. You may also need to take antibiotics to treat the infection.

How do you get rid of a Bartholin cyst?

Is Bartholin cyst caused by stress?

It is not known if stress can cause Bartholin cysts . The cause of Bartholin's cysts can be bacterial infections, sexually transmitted infections or injury to the vaginal are

How do you get rid of a Bartholin cyst?

What happens if a Bartholin cyst goes untreated?

Given time, an untreated cyst can become infected, leading to an accumulation of pus . This condition, a Bartholin abscess, can cause women great pain and requires treatment to eliminate the infection. If you suspect you suffer from a Bartholin cyst or abscess, it is important to seek medical guidance.

Can Bartholin cyst occur in virgin?

Sexual intercourse is not necessary for the Bartholin gland, especially the infection, to clog and form a cyst or abscess. It can also be encountered in virgin women . In order to avoid Bartholine cysts or abscesses, hygienic rules should be followed carefully.

Can you have a Bartholin cyst for years?

You can have a cyst for years with no symptoms . But if a cyst gets infected by bacteria, it can grow and become red and painful. This is called an abscess. Opening and draining the cyst usually cures the infection.

Why is my Bartholin cyst not going away?

Call your doctor if you have a painful lump near the opening of your vagina that doesn't improve after two or three days of self-care — for instance, soaking the area in warm water (sitz bath). If the pain is severe, make an appointment with your doctor right away.

How long does it take for a Bartholin cyst to burst?

Bartholin gland abscesses usually develop over two to four days and can become larger than 8 cm. They tend to rupture and drain after four to five days .

Do Bartholin cysts go away on their own?

A Bartholin cyst develops when a blockage occurs in a Bartholin gland in the vagina. This blockage causes a lump that can cause irritation and pain during walking, sitting or sex. Bartholin cysts can resolve on their own over time . If it becomes infected, it may need treated by a healthcare provide

What is the main cause of Bartholin cyst?

Experts believe that the cause of a Bartholin's cyst is a backup of fluid . Fluid may accumulate when the opening of the gland (duct) becomes obstructed, perhaps caused by infection or injury. A Bartholin's cyst can become infected, forming an absces

Can a Bartholin cyst go away without bursting?

Some Bartholin gland cysts go away without treatment . You can take a nonprescription pain medicine such as ibuprofen (Advil or Motrin, for example) to relieve mild discomfort. To help healing, soak the area in a shallow, warm bath, or a sitz bath. This can help a cyst drain and heal on its own.